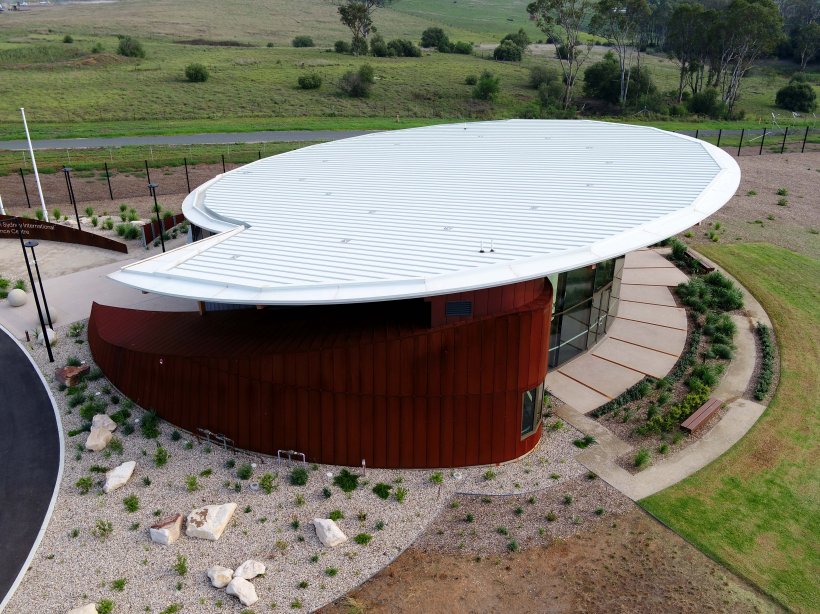 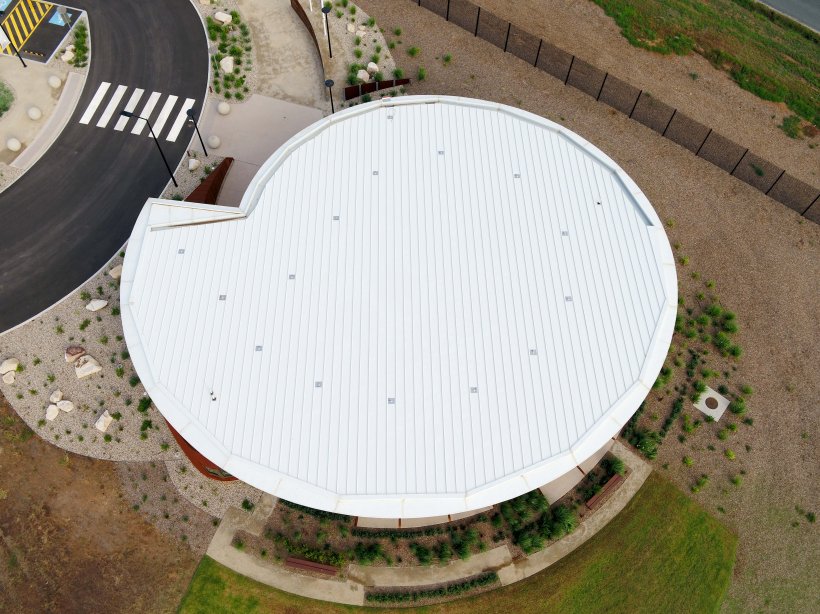 Fielders Cadence® is the latest profile in the Fielders Finesse range and was unveiled on the striking Western Sydney International Airport Experience Centre. In this project, 511m² of Fielders Cadence® made from COLORBOND® steel in the colour Surfmist®, was rolled onsite.

Designed to inspire and educate, the Western Sydney International Airport Experience Centre (WSIEC) is designed as an iconic structure, offering panoramic views of the new Western Sydney International (Nancy-Bird Walton) Airport as it transforms from plans to construction to completion. Architects, Nettletontribe, were engaged to design this amazing, multi-purpose facility. In essence, the Experience Centre is a stunning ring-side seat into the development of Sydney’s greatest infrastructure project of modern times.

Fielders supported the appointed architect, Nettletontribe and appointed contractor, Watpac Construction, during the design development period. Part of the process was unveiling a brand new product, Fielders Cadence®, that had the striking looks and versatility to create such an outstanding building. Fielders Cadence® has the same eye-catching flat pans as Fielders Prominence™ but is clip-fixed for optimised thermal performance and longer lengths. The Fielders unique Snapklip™ system allows for quicker installations and more diverse applications.

The Fielders Mobile Milling Team rolled the 0.55BMT sheets on site in 400mm widths and varying lengths to follow the swirling contour of the roof. Roofing contractors, Quikdeck Roofing (who won a MRCAA award for this project) installed a total of 511m² of Cadence® using 2,600 Snapklips. The installation was done on schedule without any unforeseen setbacks, and the building was officially opened in 2019 by Prime Minister, Scott Morrison.

Fielders Cadence® is a statement roofing and cladding product which can be used horizontally and vertically. It is strong, versatile and very quick to install using Fielders' unique Snapklip™ system, and brings into reality outstanding designs like the Western Sydney International Airport Experience Centre. In this project, 511m² of Fielders Cadence® made from COLORBOND® steel in the colour Surfmist®, was rolled onsite in 400mm cover widths in varying lengths.

Not all products featured in this case study are suitable for every application, project and environment. You should confirm the suitability of particular products for your project by contacting the supplier directly and by obtaining information and advice specific to your circumstances. The statements, information and opinions quoted in this case study are provided by the featured supplier. Please refer to the Terms of Use for further details.