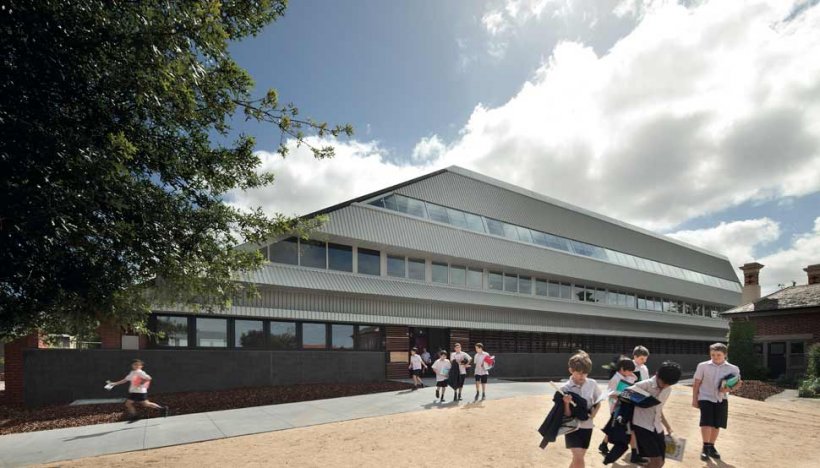 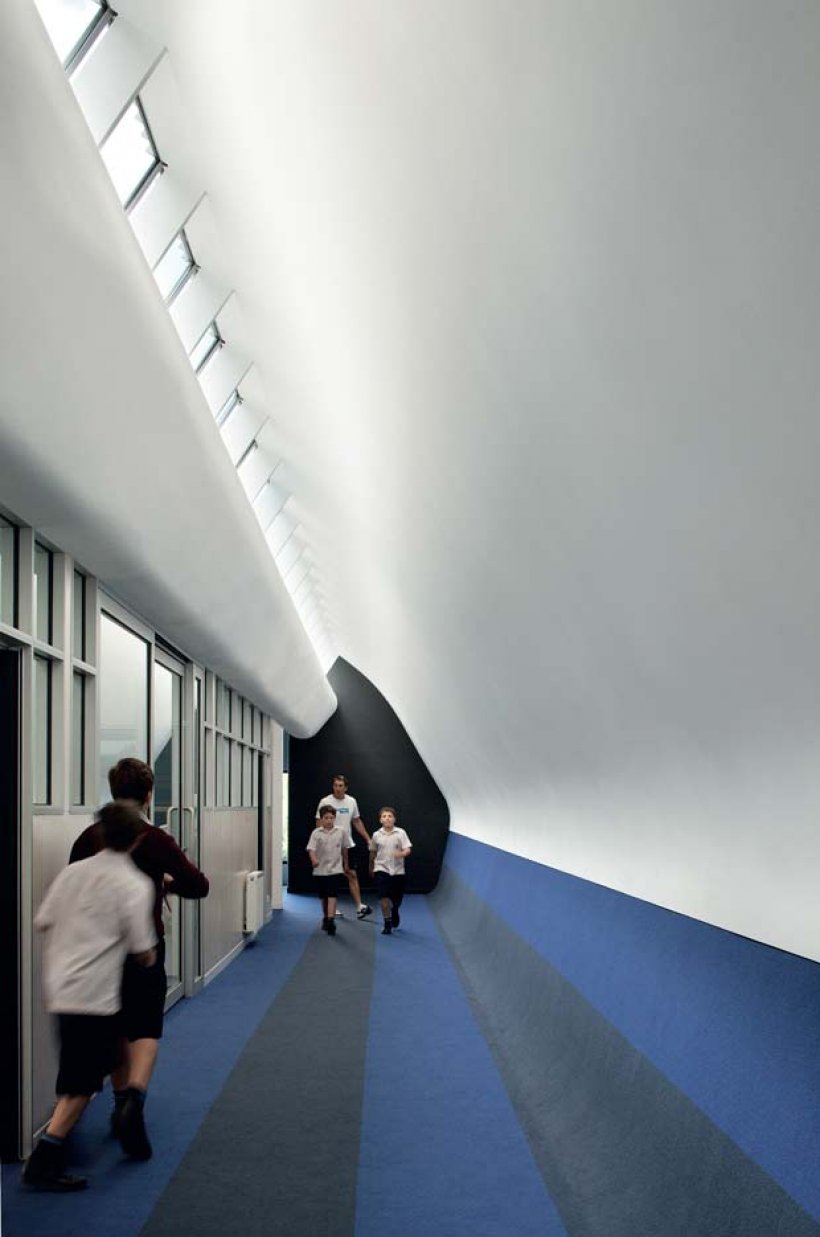 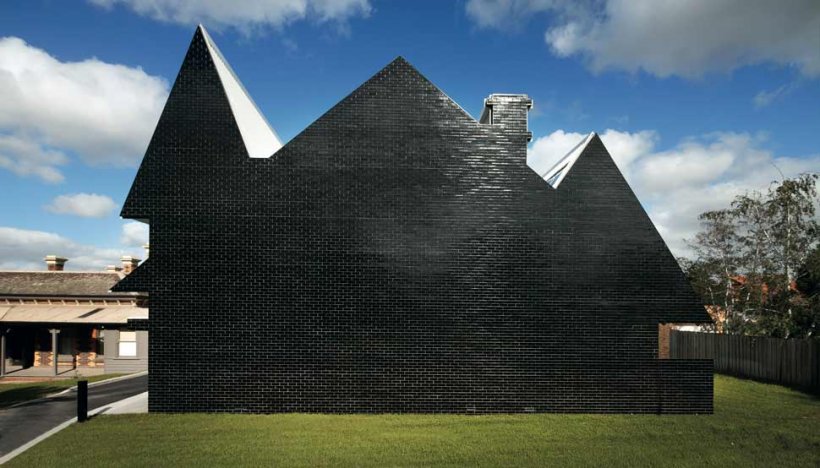 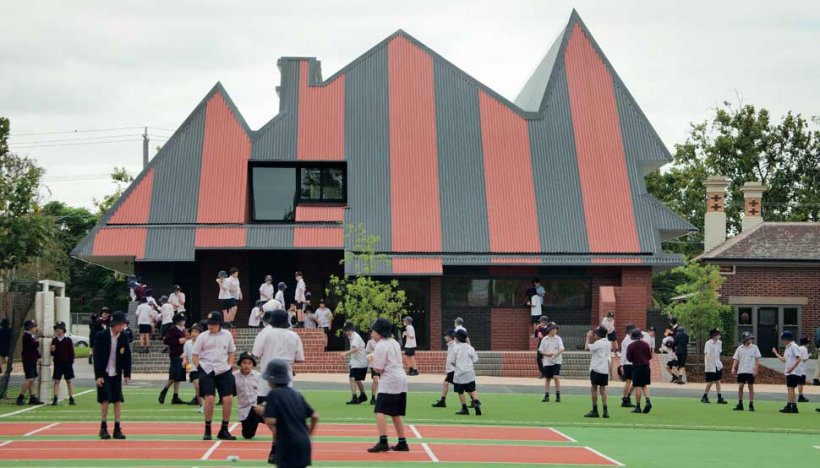 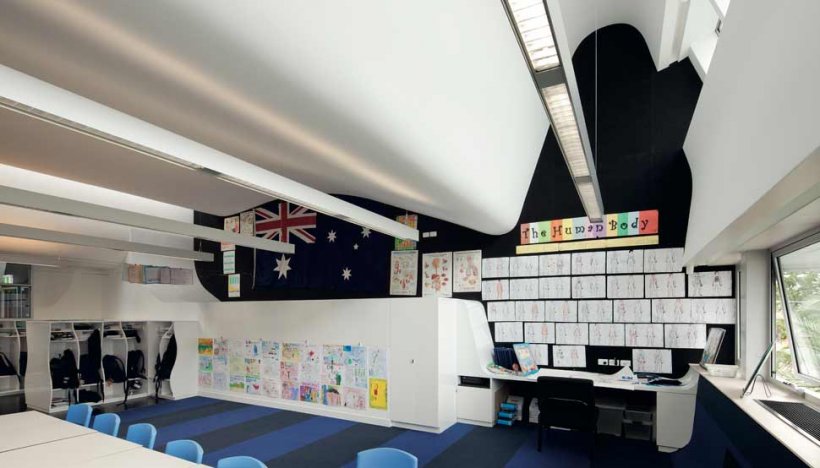 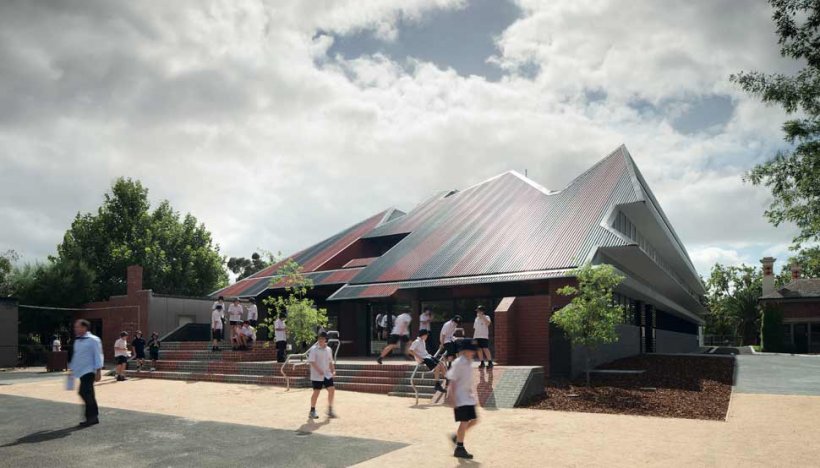 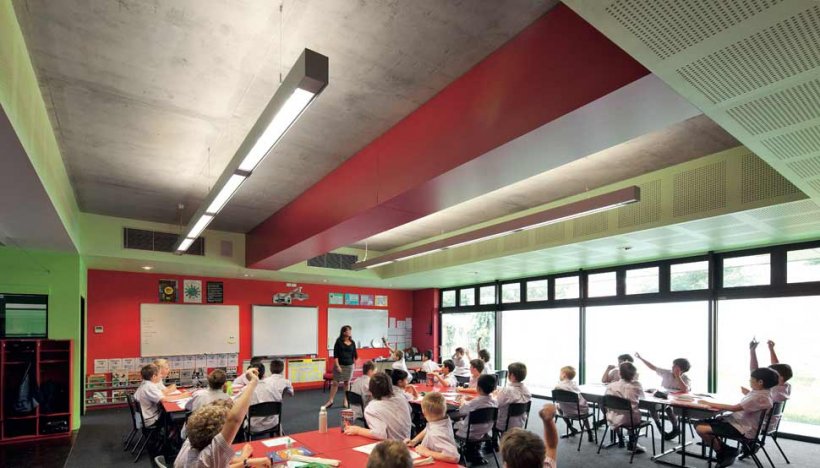 The PEGS Junior building offers a whimsical take on a federation house, among other inspiring ideas.

Having already designed the senior school building for Penleigh and Essendon Grammar School (PEGS), architects McBride Charles Ryan (MCR) were approached to design the Junior School too. The new home for the Year 5 and 6 boys called for a traditional approach with four separate and well-defined classrooms, as well as breakout spaces, in a two-storey building.

According to Junior School head Dean McCarter, the school campus had grown organically, with a collection of buildings clustered around a central sporting area. “We have buildings in all different styles at the school, so we asked the architects to design something that just fits,” he says.

Taking their design cues from the local neighbourhood and childhood references, the new school has four distinct facades that embody different narratives. The silhouetted Nicholson Street facade – the building’s public face – initially took McCarter by surprise. “Not too many things make me speechless but that profile did! But after Debbie [Ryan] and Rob [McBride] explained it to me, it all made sense,” he says. The facade was created from a literal flattening and abstraction of a well-known federation house designed by Beverley Ussher. With its glossy dark bricks and oversized form, it has an ominous, caricatured ‘haunted house’ feel to it.

Students have compared it to Harry Potter’s Hogwarts School of Witchcraft and Wizardry, an intentional gesture according to the architects. “We wanted to ignite the imaginations of young boys and also provide a functional, sustainable and lasting legacy,” says MCR director Debbie Ryan.

The western façade conjures up multiple references: the students have nicknamed it ‘Starship Enterprise’ because of the sci-fi appearance of the striped steel roof, which diagonally slices the extruded form. The SPANDEK® roof made from COLORBOND® steel in the colours Headland® and Monument® also nods to the home of the Essendon Football Club across the road, and creates a circus-marquee-meets-federation-grandstand aesthetic that is an ideal backdrop for a children’s playground.

The building’s northern Shinto Shrine-esque facade and southern ‘Brutalesque’ elevations are equally as engaging. The northern facade opens out to provide outdoor learning spaces and the southern facade offers a generous lockable breezeway space – a place for the boys to eat or ‘hang out’ within a sheltered environment.

The walls of the northern and southern facades mimic a steeply pitched roof and are made from COLORBOND® steel in LYSAGHT LONGLINE® profile, selected by MCR for its clean lines and “similarity in appearance to standing-seam metal roofing”. The less visible roofing between these facades is LYSAGHT KLIP-LOK 700® made from COLORBOND® steel in the colour Shale Grey™, chosen for its cost-effectiveness.

Steel was used extensively throughout the project, for its choice of colours, integrity, appearance and economy, according to Ryan.

“The realisation of the form through combinatory geometry resulted in numerous bespoke junctions and details in the steel work,” she adds.

The steel ‘sausage’ extrusion of the Nicholson Street profile creates an unusual roof line and engaging spaces inside, particularly on the upper-level where classrooms with curved ceilings are painted in a vivid blue colour scheme to create a “floating in the clouds” experience for Year 6 students. Downstairs the bright green and red palette is more grounding for the Year 5 boys and offsets the hard brick and concrete.

This is a school building that is robust, well planned, handsome and spatially sophisticated. It creatively engages with its context and feels good to inhabit. But its real success is illustrated by the response from students, Debbie Ryan says, recalling that a Year 5 boy read a poem he had composed about the new building at its opening. “His insights were testimony that we had achieved what we set out to do,” she says. “We had ignited his imagination. We had led him to see more of the world than he otherwise might have.”

McCarter concurs, saying he has been overwhelmed by the response: “It’s a great building for us and the boys love it, younger kids have walked past with wonderment and said ‘I’m going to be there one day’.”

Not all products featured in this case study are suitable for every application, project and environment. You should confirm the suitability of particular products for your project by contacting the supplier directly and by obtaining information and advice specific to your circumstances. Please refer to the Terms of Use for further details.