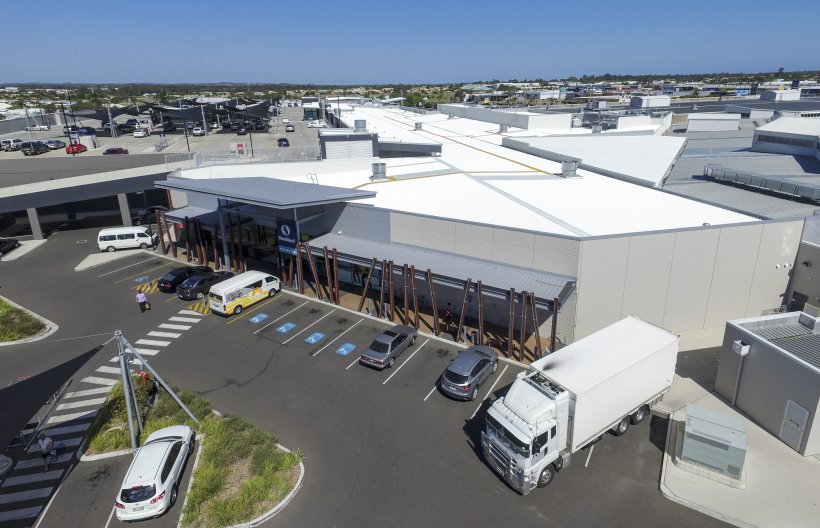 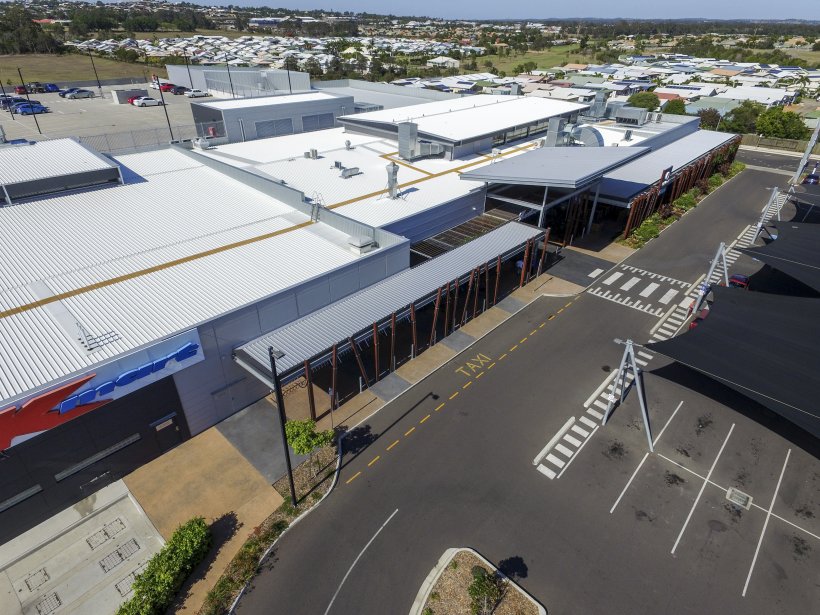 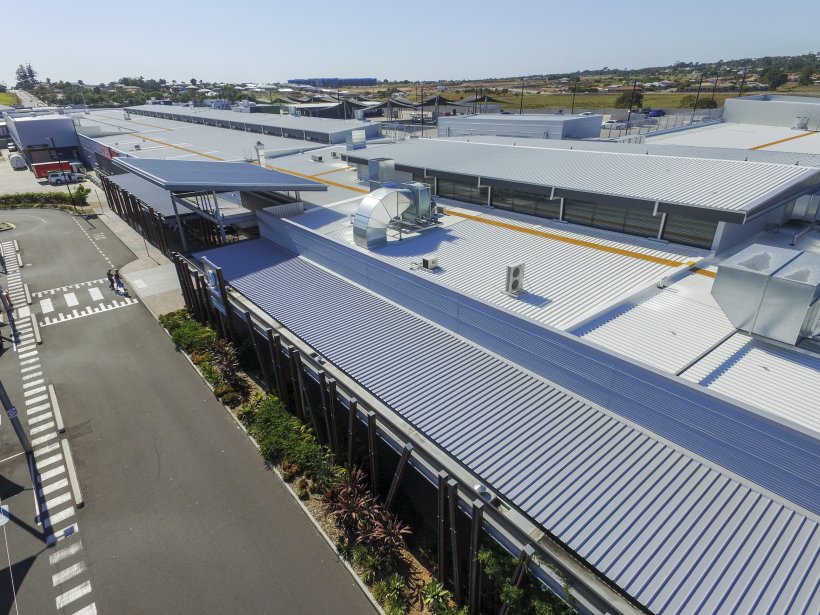 To explore just how much the inclusion of micro-climate effects in energy modelling can impact predicted cool roof energy savings, BlueScope and Stockland initiated a modelling study to account for above roof micro heating using a Stockland shopping centre's 15,000 square-metre roof as a reference case.

The focus of the study compared the thermal performance of roofing made from conventional ZINCALUME® steel with COLORBOND® Coolmax® steel in the colour Whitehaven®.

COLORBOND® steel in the colour Surfmist® was also compared, finding improved performance over conventional ZINCALUME® steel roofing, albeit less than for COLORBOND® Coolmax® steel roofing broadly in line with their thermal surface properties.

“We saw the adoption of cool roof technology as a key way of doing this. In line with our ongoing commitment to sustainable design we decided to explore the practical benefits of BlueScope's COLORBOND® Coolmax® steel as part of our Hervey Bay shopping centre redevelopment. We wanted to understand the role that cool roofs might play in improving indoor comfort, reducing up-front capital costs associated with air-conditioning equipment and reducing energy consumption over the building’s lifecycle.

From the study, we aimed to gain a quantitative understanding of the energy savings and other benefits we could expect when considering the second-order effects of hot air movement over  a building.”

Stocklands and BlueScope engaged consultants and academics to investigate both the micro-climate above roofs and the second order impacts on building cooling loads.  These included Lend Lease Sustainable Design Manager and member of The Australian Institute of Refrigeration Air Conditioning and Heating (AIRAH), Mr Graham Carter, and University of Wollongong Associate Professor,  Dr Buyung Kosasih.

“We seek ways to make our assets more resilient by minimising heat gain through the building envelope, to maintain indoor comfort and reduce energy demand. The outcome of this research revealed that industry simulation tools only account for 25 to 50 per cent of the full energy benefit of cool roofs for larger roofs”1

Mr Carter and Associate Professor Kosasih identify major shortfalls in current thermal energy assessment methods in their publication “Not So Cool Roofs”1, which outlines the study and its key findings. In summary, they contend that the effect of micro-climate created by a heat-absorbing roof is ignored by the vast majority of cooling load calculation and energy simulation tools, and that this omission is a key factor in underestimating cool roof energy savings.

They observe that cool roof energy savings for larger roofs, like those common for industrial facilities, shopping centres and airports, are likely to have been greater than forecast using common energy simulation tools. 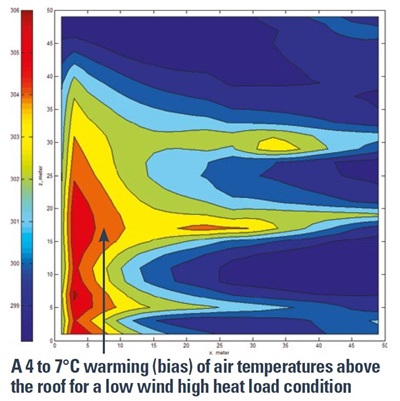 “The outcome of this research revealed that industry simulation tools only account for 25 to 50 per cent of the full energy benefit of cool roofs for larger roofs.”1

“The implications of not accounting for the roof micro-climate above larger roofs are significant and should be addressed within our industry.”

The University of Wollongong (UOW) conducted parametric 3D Computational Fluid Dynamics (CFD) analysis to characterise the roof micro-climate as a function of the convected heat from each roof surface.

Mr Carter’s experience was then called on to estimate the second-order effects of the micro-climate above the Stockland Hervey Bay shopping centre with various hypothetical changes to roof material, wind condition and rooftop plant location.

This was done along with EMF Griffiths simulating first-order effects using current energy simulation tools for each roof type that did not bias local above-roof air temperatures.

“The amount of potential unaccounted savings varies depending on factors such as roof size, climate, insulation level and roof-top plant location but the upshot is that for large roofs, like those common for industrial facilities, shopping centres and airports, our study found that current energy modelling is likely to  under-predict the cooling energy savings derived from cool roofing.”

The study team also conducted specific energy modelling scenarios to understand the predicted range of second-order impacts and savings.  This included hypothetical modelling of the 15,000 square-metre-roofed Stockland Hervey Bay building in Sydney with the rooftop plant centrally located (having higher heat impact than when located on roof perimeter) and different wind exposure (country and urban).  The predicted energy savings multiplier to account for second-order effects ranged from a minimum of two and varied up to four.

For the modelling scenarios considered and the case study roof, the modelling predicted that combined first and second-order annual thermal savings by choosing COLORBOND® Coolmax® steel over conventional ZINCALUME® steel ranged from 27 to 44 kilowatt hours per square metre (kWhr/m2) of roofing.

The corresponding electrical savings ranged from 4 to 7 kilowatts of energy per square metre (kWhe/m2) on the basis of the Hervey Bay Building’s high-efficiency water-cooled condenser conditioner. Electrical savings would be expected to be greater for a less-efficient cooling plant.

With the second-order effects added to the modelling, the peak cooling load was predicted to lower by 169 kWr (11 Wr/m2) over ZINCALUME® steel roofing. The predicted reduction was 323 kWr (21 Wr/m2) when the building was hypothetically modelled with a centrally located plant in a shielded city environment.

The potential economic value of using COLORBOND® Coolmax® steel over ZINCALUME® steel was assessed assuming an electrical consumption charge of 25 cents per kilowatt hour and an implied value in reducing peak load for the cooling plant of $930 per kilowatt2.  The range of predicted savings for the Hervey Bay building from actual plant location in an open country environment through to central plant location in a shielded city environment was determined. The range of predicted savings was also determined for minimum code compliant water and air-cooled systems to provide a guide to maximum possible savings with different equipment.

Mr Adams encourages ESD consultants and the industry professionals who engage them to investigate second-order effects when predicting cool roof energy savings. Mr Adams also acknowledges that this can be challenging when current tools need to be updated − in the meantime consideration should be given to adjusting first order savings by a conservative multiplier for cool roof energy savings as appropriate to account for their second-order benefits. “Doing so will help ensure that the ability of cool roofs is not undervalued, and more  energy-efficient outcomes can be achieved." 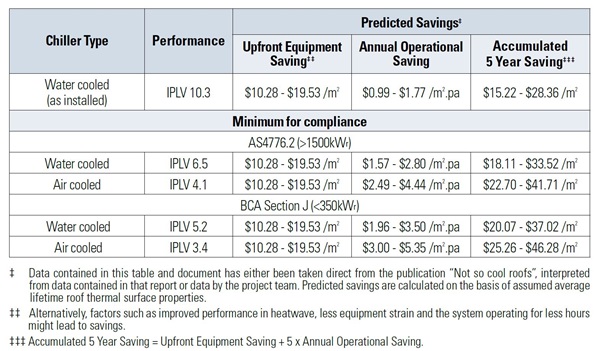 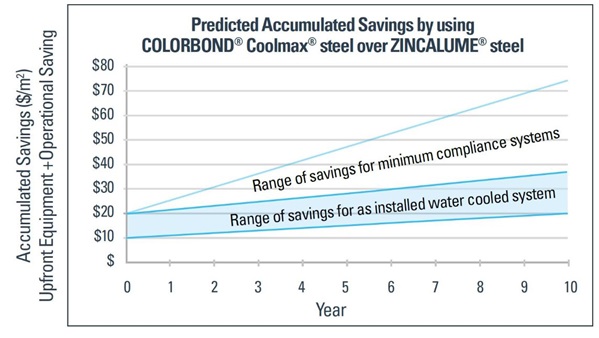 Not all products featured in this case study are suitable for every application, project and environment. You should confirm the suitability of particular products for your project by contacting the suppliers directly and by obtaining information and advice specific to your circumstances. The statements, information and opinions quoted in this case study are provided by the listed sources and are a reflection of their views and experience on the above project. Please refer to the Terms of Use for further details.