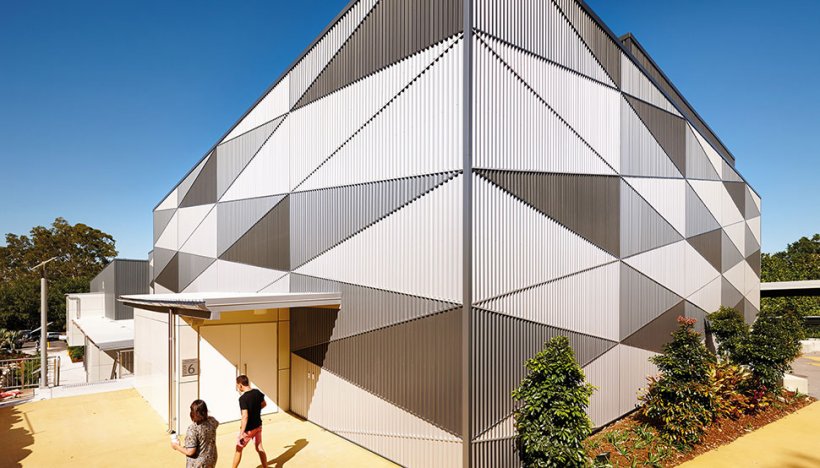 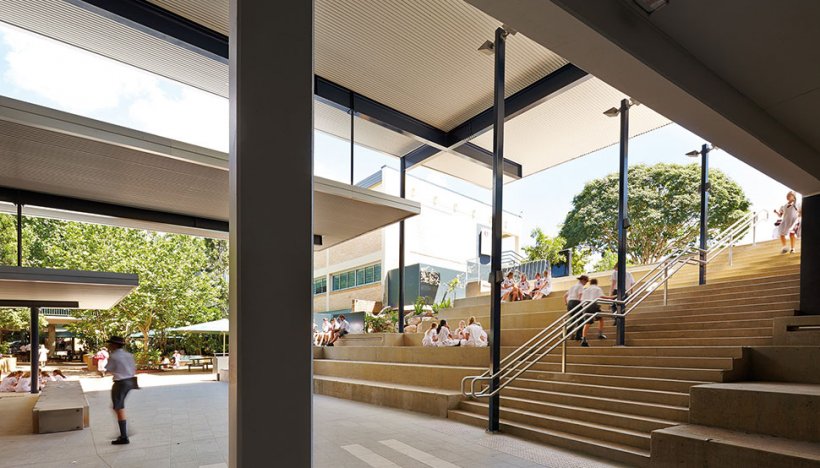 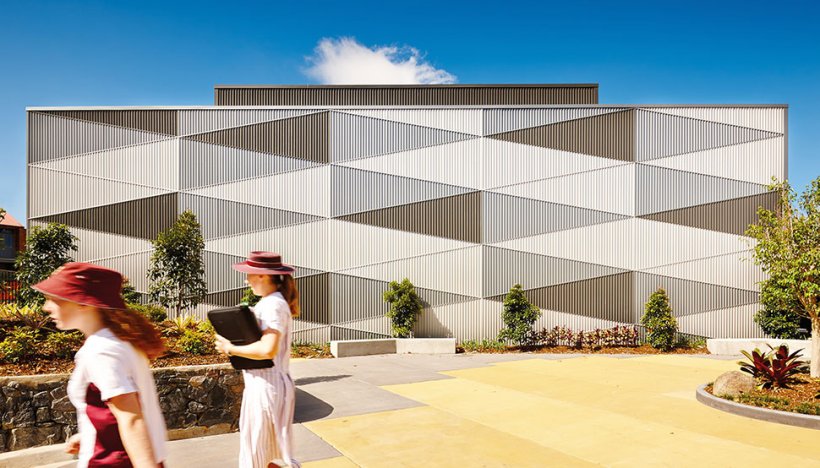 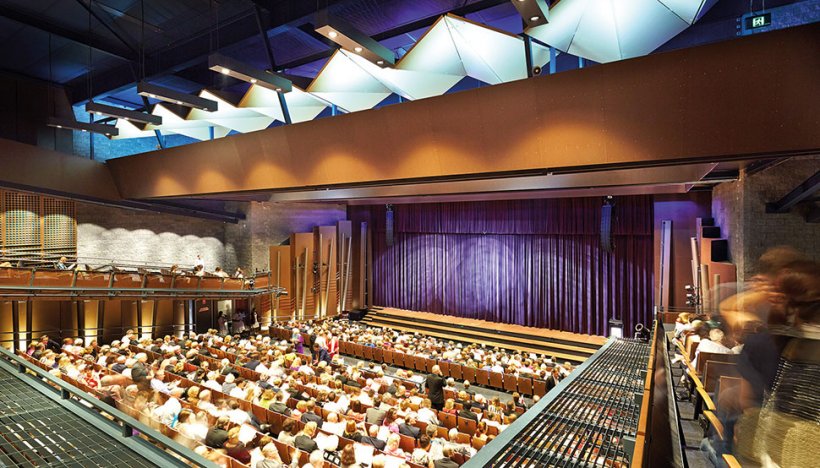 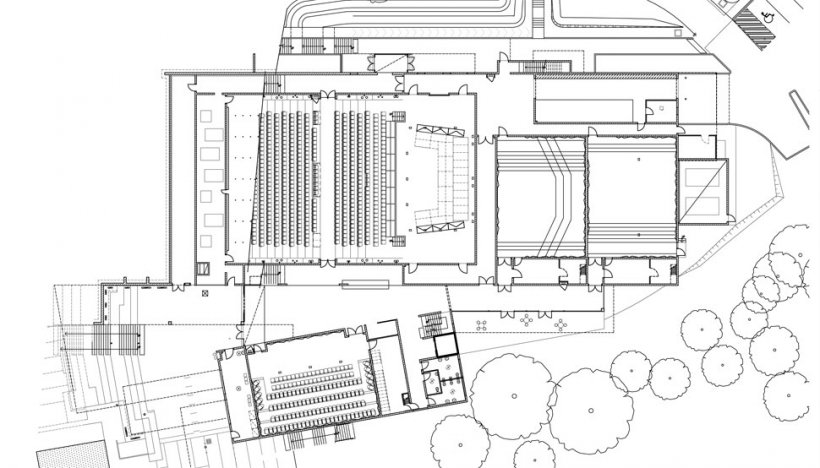 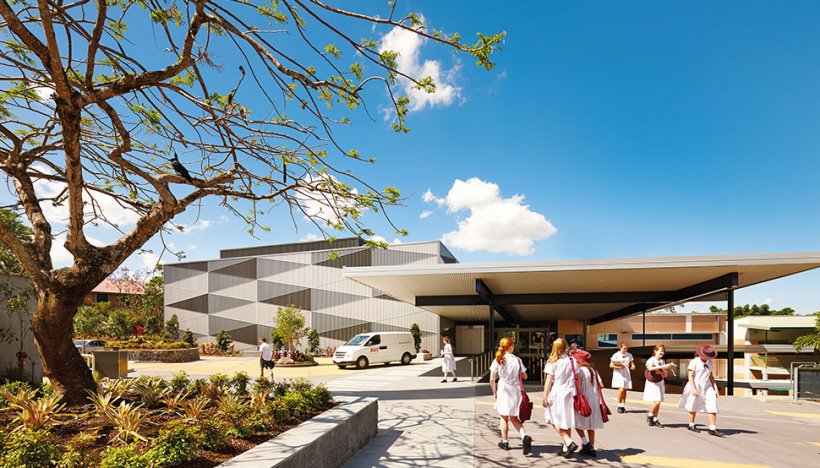 While the patterning of the decorative façade has no pragmatic role, it adds interest and a unique identity. The lively cladding of Phillips Smith Conwell Architects’ performing arts venue alludes to the theatrics of its interior.

St Peters Lutheran College understands that good things take time and that investment in its infrastructure will yield dividends. In 1995 the College embarked on a major facility for the teaching and performance of music and drama. Brisbane architects Phillips Smith Conwell (PSC) won an invited design competition to include a 1000-seat performance venue, rehearsal and tutorial rooms.

The venue’s back-of-house is a crisply detailed ‘box’ with cladding made from COLORBOND® Metallic steel in Stramit Longspan® profile, in the colour Facade®.

From here the diagram of the new performing arts facility is immediately clear; two cubic volumes are separated by a two-storey glazed facade that defines the entry and the primary circulation spaces.

During a tour of the venue with the College’s director of music, Christine Taylor, the place was buzzing. “A lot of energy went into getting this space right; the acoustics and the experience of this space were really important to us,” adds Taylor. “There was not a lot (of money) left over for the outside.”

Indeed, the sheer quantum of accommodation and the complexities associated with acoustic treatments put considerable pressure on the project budget. With the modest funds available, the project was made economically feasible through the architect’s thoughtful integration of steel building products.

One of the project’s great successes is a new covered amphitheatre carved into the hillside. Two crisp, white horizontal canopies define the double-height ceiling space lined in perforated Stramit® Acoustic Panels made from COLORBOND® steel in the colour Surfmist®.

The upper part of the expansive white planes rests on an expressive gloss black structure comprising 530 UBs elegantly connected to 220 CHS columns. The lower plane is suspended from above on slender 100 RHS hangers, a strategy that minimises the number of columns in the active entry space. To minimise the bulk of the canopy, the primary structure is expressed while sub-framing is concealed.

The auditorium volume cladding is made from COLORBOND® steel in Stramit Longspan® profile, in a clever combination of colours including Monument® and the COLORBOND® Metallic steel colours Axis® and Facade®. These form a playful, elongated harlequin pattern.

The result is a geometric camouflage effect that animates what might otherwise have been a lacklustre shed – demonstrating that modest funds can indeed produce exceptional results with a little creative thinking.

PSC’s project director Philip Ward explains the contractors followed PSC’s documentation very closely. “We did a lot of three-dimensional detailing of the junctions. The flashings are fairly standard, it was the overall sequencing that was important,” he says. “It went together like giant shingles.” The workmanship on the facade is excellent: in some parts, up to eight folded COLORBOND® steel flashings come together and align consistently.

Business development manager Colin Gifford from cladding company Haggarty Roofing says the wall cladding system was unusually intricate. “It was challenging but very rewarding as the project progressed,” says Gifford. “From the first time we saw the drawings it was apparent that this project would have people talking. The design criteria really highlighted the flexibility of COLORBOND® steel and how it can be used to create a unique and eye-catching appearance.”

Ward and the consultant team developed a clever hybrid structure capitalising on the versatility of structural steel. Concrete block walls, some as tall as 12 metres, are braced with both vertical and horizontal steel trusses that reduce their vertical span. Horizontal steel trusses form the floor of the access gantries that wrap the perimeter of the interior. A series of four metre-deep pairs of Vierendeel trusses span the main auditorium space. The trusses are used as the lighting rigs, accessed from the perimeter gantries.

Ward modestly states this strategy “is one of the reasons it is a very economical building”. This integration of steel has eliminated the need for any major columns in the auditorium. The vertical trusses also support pleated acoustic panelling. These sculptural elements appear playful and add to the overall composition but they are also highly practical. “There is not one element in the hall that is not there for a functional purpose,” Ward adds.

A peek inside the auditorium before leaving reveals a dozen or so flautists marching on stage in preparation for an Anzac Day commemoration. Akin to the harlequin pattern of the building, the troupe is a little out of step yet delivers a most impressive effect.