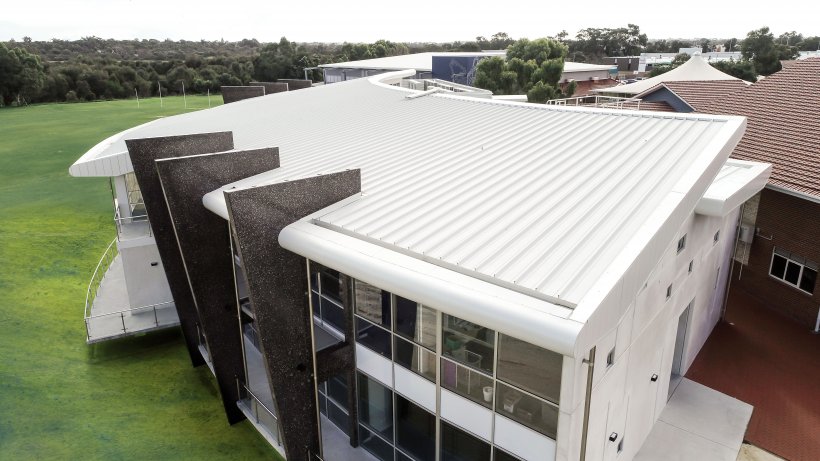 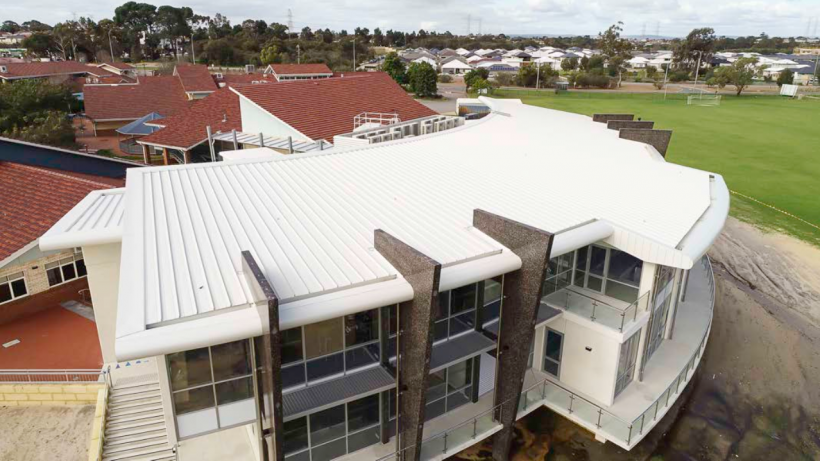 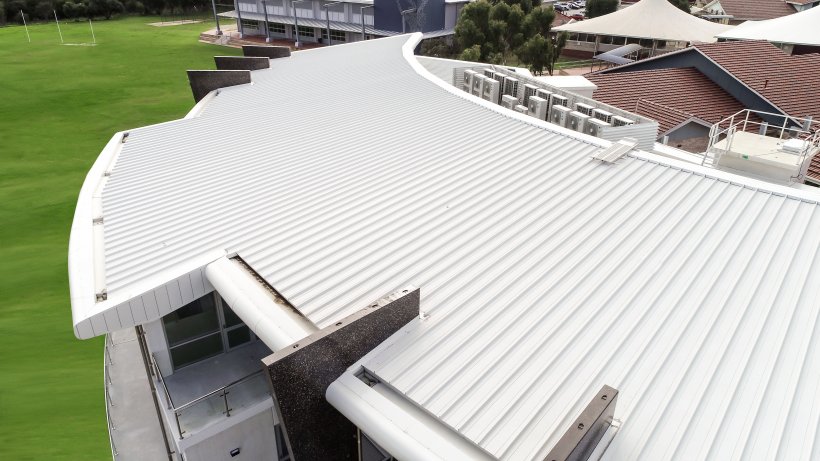 Fielders FreeForm™ (made from COLORBOND® steel in the colour Surfmist® Matt) was selected by the architects due to its architectural standing seam appearance and capability to curve and taper to suit the fan-like shape and form of the proposed structure.

As part of the Emmanuel Catholic College extension, the brief was to construct a new two-storey English, Arts and Media Block and refurbishment of an existing IT block. Opened in early 2018, the state-of-the-art facility was designed by EIW Architects led by Tony D’Andrea and his team, to deliver a striking and purposeful building for the staff and students of the school.

Fielders was contracted by EIW Architects and Universal Constructions to provide a roofing solution for the large canopy of the new pavilion, to provide coverage for 85% of the new seating.

During the schematic design stage, Fielders FreeForm™ was selected by the architects due to its architectural standing seam appearance and capability to curve and taper to suit the fan-like shape and form of the proposed structure.

FreeForm™ was also specified as it eliminated the need for step joints and additional flashings which helped make the structure watertight, and Fielders offered a 20-year Watertight Guarantee1.

The Fielders Mobile Mill was based on-site at Emmanuel Catholic College to roll the FreeForm™ sheets, delivering a faster turnaround of supply and longer sheet lengths by eliminating the need to transport the profile by road.

After being rolled on-site, the 15-metre sheets were lifted to the roof and installed on the engineered clips and seamed, which helped to reduce water ingress into the roof. The benefit of site rolling FreeForm™ also meant that Fielders were able to modify and adjust the sheet widths and lengths to suit the existing structural steel tolerances. This benefited the project by reducing any issues with the tolerances in the steelwork as the sheets were able to vary in shape and form.

Not all products featured in this case study are suitable for every application, project and environment. You should confirm the suitability of particular products for your project by contacting the supplier directly and by obtaining information and advice specific to your circumstances. The statements, information and opinions quoted in this case study are provided by the featured supplier and reflect the views of the author. Please refer to the Terms of Use for further details.