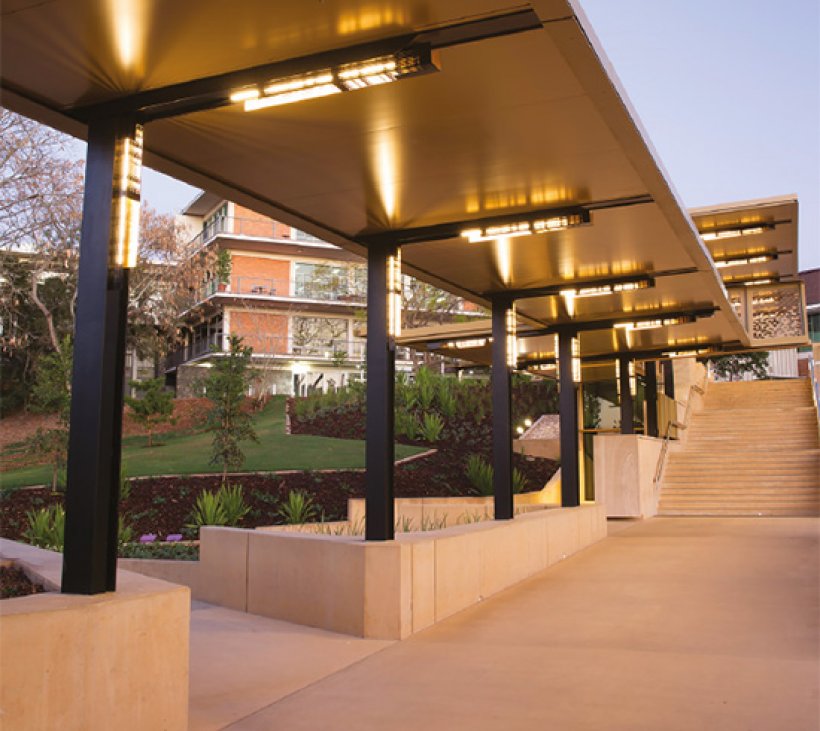 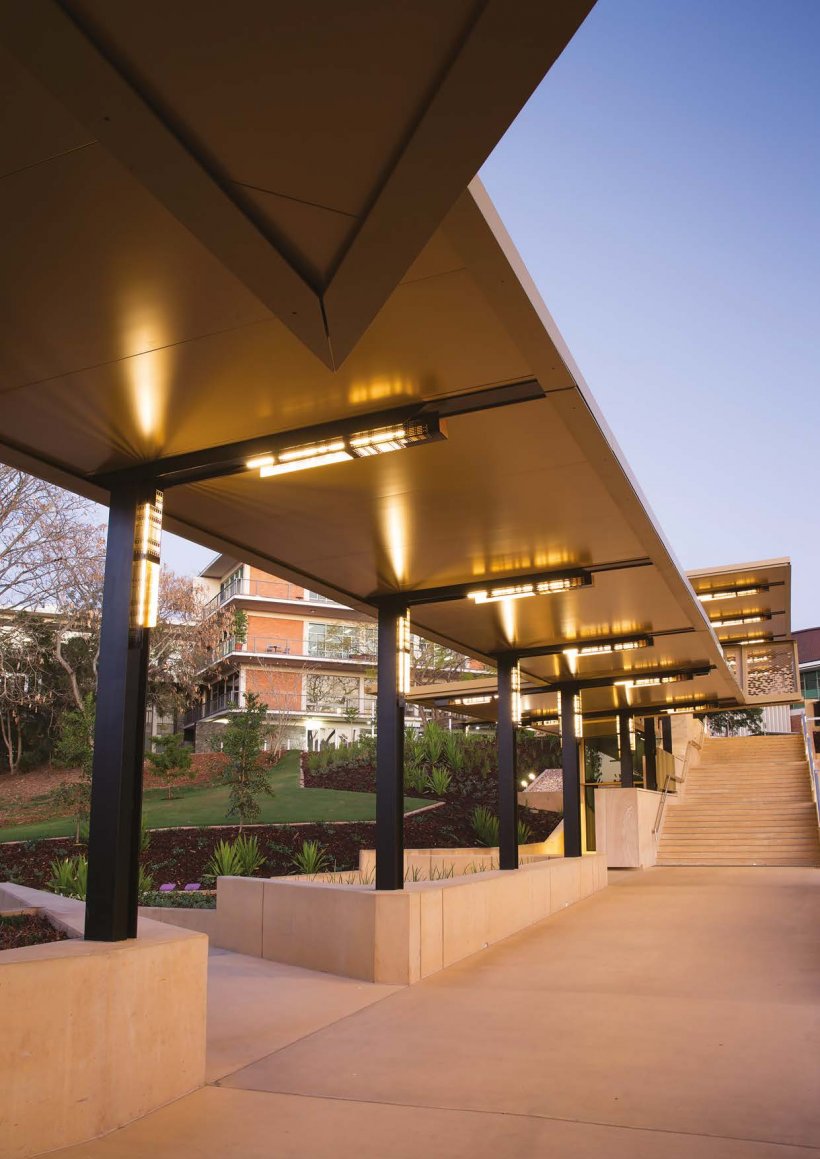 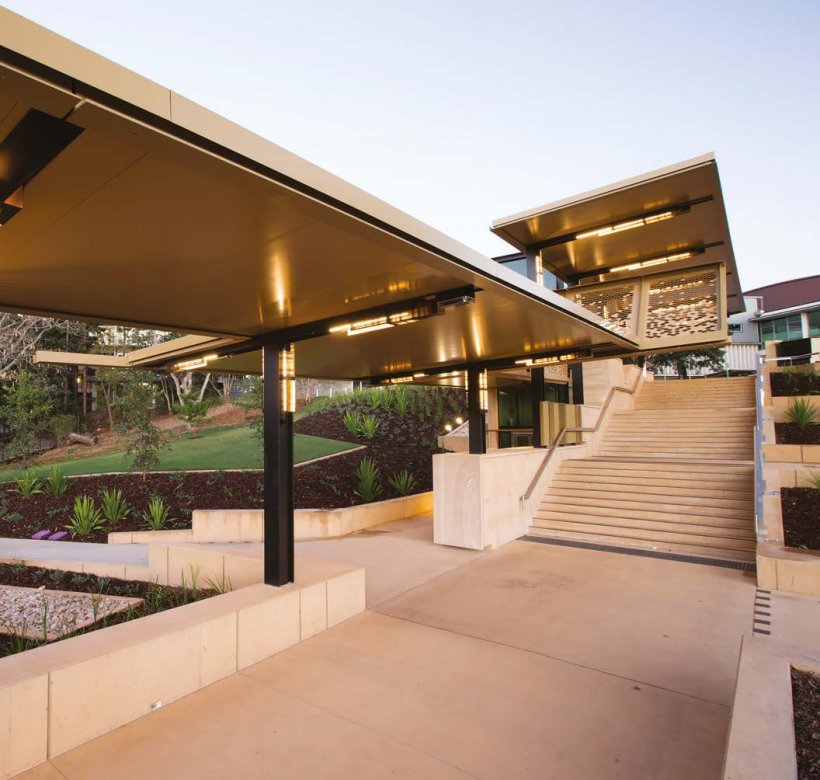 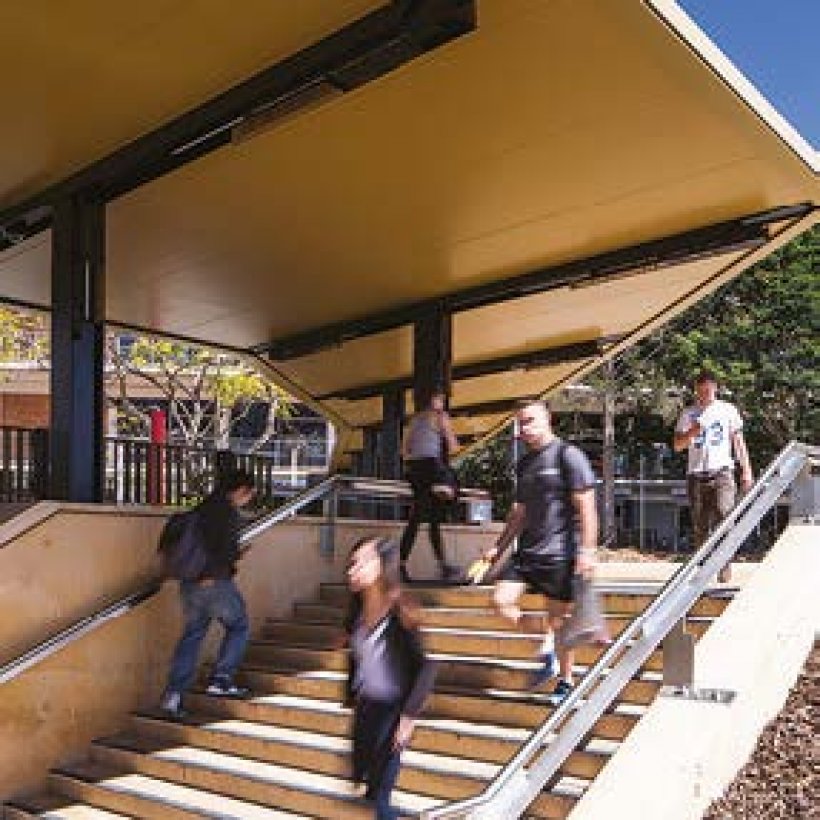 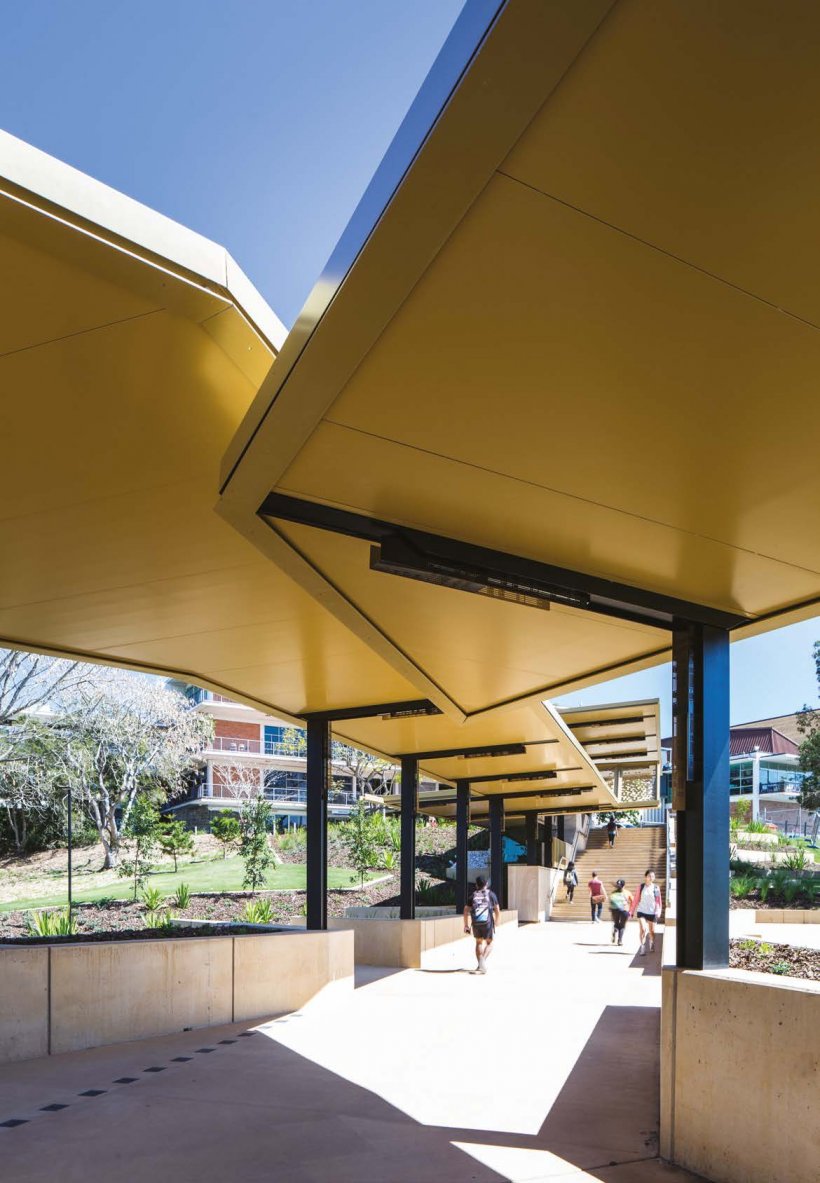 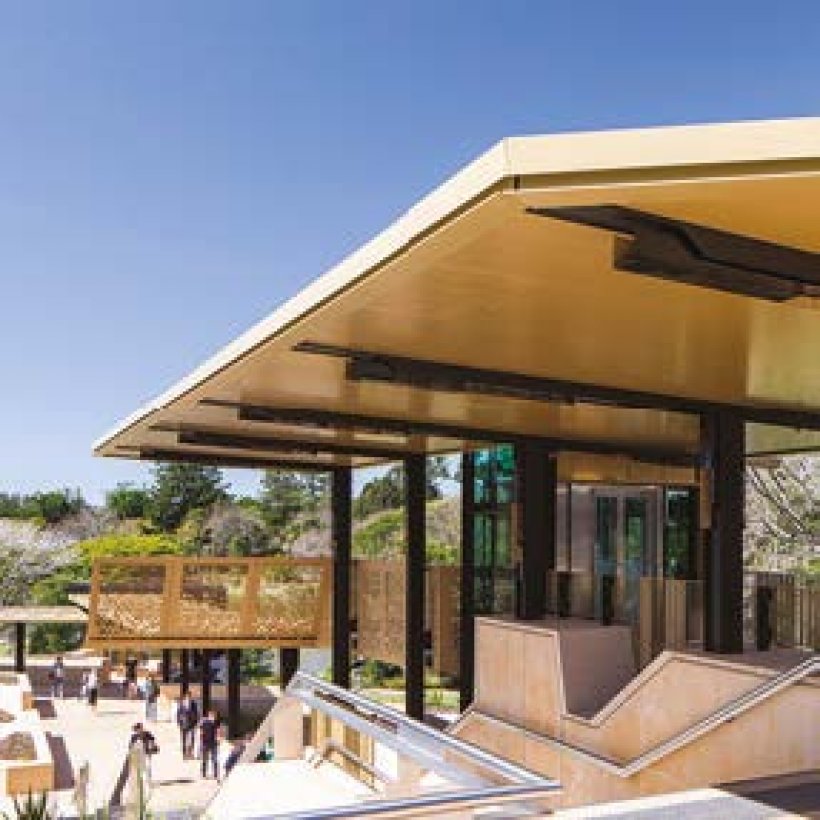 The University of Queensland has finished the roofing for its recently completed Pedestrian Link with a lavish COLORBOND® Metallic steel custom colour called Callisto™.

Cox Rayner Architects’ project architect (and, fittingly, former University of Queensland Architecture graduate) Jack Dodgson said the need for a new walkway increased after a bus and pedestrian-only Green Bridge to the University’s Lakes Entrance was built. “More and more people started accessing the University from that side,” said Mr Dodgson. “What was essentially designed as a back-of-house entrance became the primary entrance.”

Mr Dodgson said an existing road aggregate path dipped down to a bus stop, then back up at a very steep grade to the University Union, which took pedestrians to the University centre via the UQ student Union building.

He said around 20,000 people a day were walking, often four-abreast, on this path which became slippery when it rained.

“The level change was significant at 12m from the bottom of the hill to the top,” said Mr Dodgson. “It became incumbent on the University to address this by creating more suitable access.

“Instead of doing a 75-metre bridge, we decided to elevate the land and reduce the size of the bridge to 35 metres, to reduce cost and also extend the experience of walking through the garden.

“Rather than have one long, monotonous bridge we changed the grades of the pathways. These have three different roofs with different path directions and heights, which stages the entrance and accentuates the level changes. The path from the bridge is like a threshold which compresses and then when you’re at the top of the stair it’s like a window sill that captures the panorama of the Lakes.”

Mr Dodgson said the intention of the walkway zig-zagging rather than being a direct path to the University was for pedestrians to see the grounds from different aspects.

“We wanted people to experience the surrounding garden as much as possible so the bridge forms a natural landscape concept. We wanted to be able to provide shelter from weather but by keeping it open on the sides allow views out to the grounds. That way, the landscape informs all of the architecture – every decision we made was supposed to enhance the landscape experience.”

This included the decision to use COLORBOND® Metallic steel in the custom colour Callisto™ to clad the Bondor Equideck® panel.

“The choice of the custom colour was informed by a couple of things,” he said. “First of all, it’s a colour that is very natural and resonates with the local environment. In the office we like to use colours that resonate with natural materials.

“In relation to the site specifically, there are fig trees all around the walkway which have little yellow flowers, the back of which are coloured in a remarkably similar gold. There’s a lot of gold colour in other vegetation around the project and the colour is also sympathetic to the soil here, although covered by grass, and also the natural sandstone.

“The colour on the steel brings a degree of warmth, especially when it has light on it because of its metallic finish.”

Principal Consultant Nick Canto of icubed consulting said the Bondor Equideck® insulated panel also performed a structural function. “The panel has a structural edge and excellent spanning capabilities,” said Mr Canto. “It was important to have the appropriate thickness in the panel because it has to support maintenance and solar loads and also perform a function as the bracing diaphragm for the structure. The 150mm panel allowed us to span seven metres.”

Mr Canto said the architects’ aesthetic vision for the project presented some engineering challenges. “It’s a unique project and the architects had a fixed vision for its aesthetics. We had some challenges with a cantilevered structure such as this to ensure vibration limits for pedestrian movements and serviceability deflections were not a problem. Also, detailing the pre-cambers to ensure everything looked straight and true was interesting.”

He said steel was the ideal material to realise the architects’ vision. “Steel is a medium that we design with every day of the week so we are very familiar and comfortable with it. It is a very efficient material for this type of structure. It is certainly the most versatile and appropriate.”

The majority of the structural steel for the primary elements is universal column sections and angles. “But there was also a higher level of fabrication for the coping and flanges that created a more bespoke finish and to integrate with the custom lighting diffusers.”

Construction project manager of builders FKG Group, Adam Finn, concurred with Mr Canto’s views on compliance. “It was a design and construct project for us so we worked closely with the consultants and client during the design phase to ensure the products specified best met the design intent whilst maintaining full compliance with Australian Standards.”

He said using prefabricated steel components helped meet a short timeline for the build. “It was an extremely tight program so the speed of construction offered by the mostly prefabricated steel components such as the panels and the structural steel helped us meet the deadline. It was a lot quicker than using regular construction as it eliminated the need for additional cross supports and the panel once installed gave a prefinished roof and ceiling eliminating the need for multiple trades.

“Although quite high-spec’, it was a fairly straightforward installation. However, it was highly programmed and detailed work on what was a very tight site, one that we had to be careful not to build ourselves out of. It was a small area in which to deliver a result for the client with minimal impact on what was essentially a fully operational university campus.

“We’re very happy with the result though. The Bondor Equideck® panel provided the kind of finish the client was after. The finish on the panel is very pleasing aesthetically. As the builder we like to be proud of a visually appealing end result and that is exactly what the building delivers.”

Bondor Australia architectural business development manager, Andrew Hudson, said the company worked closely with the project architect and builder early on in the process to develop a product that suited the project’s specific needs. “We were intrinsically involved from the start so our designers, engineers and construction arm could collaborate on the project to ensure the best result,” Mr Hudson said. “Having like-minded technical people being able to speak each others’ languages definitely streamlined the build.

“There were some occasions when we encountered issues but having our supervisors on site meant we could say, ‘Hey, this is not going to work. This is what we need to do.’ We had the opportunity to adapt some of the panel lengths depending on where they would lay down in the structure and to assist with not only panel installation but also in regard to the flashing, detailing and single-jointing.”

Mr Hudson said the lengthy panel spans greatly contributed to the underside of the roofing panel’s appearance. “The top side of the panel that forms the walkway’s cover is in the Equideck® roofing profile, however, the underside is completely flat. Having seven- metre spans of smooth, uniform finish created a strong visual impact. Using other materials such as cement sheeting, the finish would be punctuated by fasteners such as screws fixing into some kind of backing substrate. This visually interrupts the finish. In this case, however, the insulated panel holds its own weight so the only interruption is where the panels themselves actually join and that is a concealed fixing.”

The Equideck® panel’s structural capabilities also allow for it to meet regional wind speed requirements and bear loads from services such as solar panels and to allow for maintenance from above. “The panels are in very long spans but their structural integrity helped meet Wind Actions Code and allow for a maintenance contractor and their tools (to the tune of 140 kilos) to climb up and work on the roof side without causing panel damage. Not that the panel itself requires a comparatively high amount of maintenance. We’re not going to have to repaint it in seven-to-10 years’ time as might have been the case with some other building materials.”

Mr Hudson said he was proud to be part of an architects’ tour following the Australian Institute of Architects’ National Awards in Brisbane. “We showed a group through and had the opportunity to talk with them. Architects are well aware that insulated panel can reduce the ingress of radiant heat from the sun but it was special to be able to explain its other benefits at such a prestigious learning facility that also teaches architecture. It was very fitting.”

“The feedback from the architects on the project was highly encouraging. They received it really well and had some nice words to say about the custom colour. There are a lot of golds out there but it’s easy for them to be gaudy – especially the shiny, anodised colours. The COLORBOND® Metallic steel custom colour Callisto™ is quite lovely. It’s a nice, soft gold.”